Home > law > When a call for prayer sets off alarm bells

In the hustle-bustle of Russell Market, a pair of squinting eyes glared at the phone screen and then looked around, shifting from one person to the other and falling back on the screen again. The middle-aged man with a petite body wore a sky blue cotton kurta. A boy who works at his shop did not come that day. Sitting idle, his restless gaze settled on an old tea seller, who agreed to take care of the shop when he went for his afternoon Namaz.

Wajid Sait, the middle-aged man, is in fact a welder who looks after his brother’s meat shop in Shivajinagar. His family has been living there since his grandfather came from Ooty during the Independence. His house is just a few kilometers away from the Char Minar Masjid, and so is his brother’s shop. Being a devout Muslim, he goes to the masjid five times a day for Namaz.

He recalled the days when he was a 5-year-old and didn’t know what azaan or namaz meant. For him, it was a way to get a piece of Paya (goat’s leg) from the beef market after their evening namaz. He remembers being dragged out of bed at five in the morning by his father and his three brothers, after listening to the morning azaan. His father used to teach him to do wudhu (the ritual of washing hands and face before prayer) and namaz.

“In that whole process, I was most interested in the fact that I will get baadam milk (almond milk) after the prayers,” recalls Wajid. Along with his brothers, he used to stand at the mosque gate and wait for the old chacha who sold almond milk. As they grew up, they spent their days praying, playing, and sleeping in the mosque.

From being that kid to being a father of two girls and a boy, Wajid has always held his religion close to his side. With his elder daughter’s wedding scheduled in January next year, he recalls how fast time has passed. The only constant that he has had in his life except for his family is his beliefs and religion.

Since his childhood, he has been waking up to the sound of the morning azaan, which has continued even now. “The first voice I hear is that of azaan, and for me, it is like my ‘dil ki dhakan’ ( heartbeat).” He believes that if he does not hear it, his day won’t be good. For him, azaan is God’s call for prayer, which is the most pious thing in his life. He says that azaan calls people from different social and financial backgrounds to come and pray together because everyone is equal in God’s eyes.

For him, the whole azaan controversy has been a political gambit. He wonders why azaan, which had been playing on a loudspeaker for years, is suddenly a problem. “We have Ganesh processions, and church bells also ring early in the morning, but nobody questions that. They are also loud enough for a person to get a heart attack.” He added that some mosques are also adopting methods to reduce the decibel levels.

Wajid believes that stopping loudspeakers in mosques would not change anything as people have alarms nowadays to remind them of Namaz. But azaan is still an integral part of a Muslim’s life, he said.

While sipping the third glass of tea, he burnt his tongue. He got engrossed in that burning sensation that he forgot what he was talking about for a split second. Then quickly gaining back his lost memory, he pounced back to the conversation. He said that he fears these recent decisions are pointing toward a bigger issue. He calls this a political strategy to target a community.

He believes that the root cause of the divide is that Islam has been misrepresented and misunderstood. Shivajinagar is called ‘mini Pakistan’ because it is a Muslim-dominated area. Because of it, many people are fearful while coming to the Russell market. He continued that people have this radical image of Muslims because many of them are afraid. Touching his long beard, he said, “People fear seeing this.”

Wajid has grown up watching Ramayana and playing with Hindu friends. “I have many Hindu friends. They come to my shop, sit and have tea. We share food and gifts at our festivals. I remember I gave biryani on this Eid to one of my Hindu friends, and she told me that they ate it for three days. I went to Bihar once, and I stayed at my Hindu friend’s place and ate jowar, rice, and roti. I do not understand where the divide is” He added that during Covid times bodies were buried irrespective of their religion, and thus all this divide between religions has just been a part of a political game plan.

Areas where the Muslim population is less were the ones facing the problem of loudspeakers the most, he said. “Are loudspeakers not being used, or are girls not wearing hijab now? See, everybody has their family and work to look after, and nobody has this much time.”

Wajid started looking restlessly on the streets again, until he found that tea seller. After a breath of satisfaction, he continued that society does have some people who are creating all these conflicts and that Muslims have been divided among themselves, which weakens them. He said that he is not afraid of what is going to happen. But he does believe that time will change for the good.

Wajid went on to explain the history of azaan. He said that back in time, Bilal, who Muhammad chose as a Muezzin (the person who calls others for the daily prayer), called people for worship. But with technological innovations, use of loudspeakers had come into being. He said there is a time gap between the azaan and namaz for people’s convenience, with the maximum being given in the morning time, which is 45 minutes.

Suddenly his phone rang with a loud alarm, and it was 12.45 p.m. He looked outside and beckoned the tea seller who came rushing in. He got up, and within no time, he said, “Allah Hafiz”, before the petite body receded into the alley’s darkness.

In April 2022, Hindutva groups started demanding a ban on loudspeakers for azaan after the halal meat controversy. They even called for playing of the Hanuman Chalisa at 5 am in temples to counter the azaan.

Meanwhile, the Karnataka government issued an order that those operating public address systems would have to apply and seek permission within 15 days.  The order is based on a Supreme Court ruling that p.a. systems should not be used between 10 p.m. and 6 a.m. 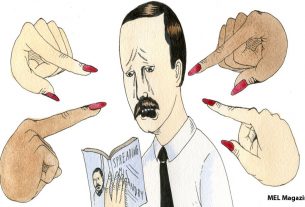 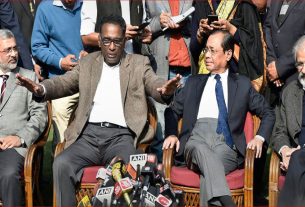 Courts are a Law unto Themselves 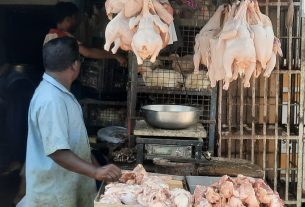