Home > Environment > Death of a River

Vrishabhavathi River, a tributary of the Cauvery, was once pure and pristine. Today it’s referred to as ‘mori’ or a drain by locals. The river, once a lifeline to thousands of people living on its banks, is now heavily polluted with industrial waste and Bengaluru’s sewage. As if that wasn’t degradation enough, nearby residents routinely burn mounds of garbage that’s dumped along the riverside.

The major chemical pollutants in the river’s water are nitrogen, phosphorus, heavy metals, detergents, pesticides and hydrocarbons. It has been found out that the pH of the water is higher in the rainy season than in summer. Priyanka Jamwal, water quality scientist at Ashoka Trust for Research in Ecology and the Environment (ATREE) says that by collecting water samples every hour from three villages downstream Peenya industry, they found high concentrations of metals like chromium, lead and manganese. It was also found that the level of discharge increased during 10 PM to 12 AM.

The polluted river emits a heavy stench and poses a health hazard to nearby communities. The pollutants have seeped into the groundwater making it unusable. Says Bejoy Kumar, a scientist at ATREE, “The Vrishabhavathi watershed carries polluted effluents downstream to join the Cauvery river through the Akravathi river.

The river originates in Bangalore city and carries domestic sewage along with industrial waste from the Peenya industrial area. A small part of it gets treated in the Vrishabhavathi sewage-treatment plant.” From the Vrishabhavathi treatment plant, the treated water passes through the Bidadi industrial area and reaches Byramangala reservoir. The treated water contains pollutants that cause skin rashes and other ailments to the farmers who use it for irrigation. This unclean water is used by 20-25 villages to grow vegetables like tomato and baby corn that are supplied to Bangalore.

Kumar explains Bangalore generates 1,720 million litres of wastewater a day (MLD), only a part of which is treated before being released into the environment. According to the Bangalore Water Supply and Sewerage Board, the Vrishabhavati plant has a capacity of just 130 MLD of which 104 MLD enters the plant from the river and 26 MLD enters the plant from the sewage system. 127 MLD is treated and released into the water whereas only 3 MLD is recycled from the plant. A study of the Vrishabhavathi water by Santa Clara University, California, attributes the current inadequacies of the plant to the fact that its capacity is a tiny fraction of the river’s flow, it cannot handle the pollutant load, its operation and maintenance are poor and made worse by power failures.

The Santa Clara study recommended increasing the plant’s capacity and installing a decentralized, wastewater treatment system which would minimize the need to construct extensive pipeline systems for transporting untreated wastewater. The important point to remember is that the Vrishabhavati can be revived.

The river Thames in London, which is now home to 125 species of fish, was once declared “biologically dead”. Threats to the health of the river and the wildlife it supported were combated by a campaign named “Cleaner Thames” that was led by an international explorer named Paul Rose who called on the Londoners to “do the right thing” by disposing waste in bins and not in the river.

Closer home, the Citarum river near Jakarta, Indonesia has been exposed to the dumping of garbage, industrial chemicals and sewage. Described as one of the world’s most polluted rivers, the Citarum supports 27 million people who use it as a source of drinking water and irrigation. The Asian Development Bank has approved $500 million to fund a project to clean the river. Singapore’s Straits Times reports that soldiers have begun a large-scale clean-up operation, starting at the Crisanti reservoir, which supplies water to the Citarum.

Bejoy says that Bengaluru’s waste-treatment plants are underperforming because of the inefficiency of their design. Moreover, concern and responsibility for the protection of the environment lie not just with the state pollution control board, which monitors and regulates industrial emissions, but also with citizens who have the life with its consequences, he adds.

The goal of the World Health Organization is to improve water quality by reducing pollution, eliminating dumping, minimizing the release of hazardous chemicals and materials, halving the proportion of untreated wastewater and substantially increasing the recycling and safe reuse globally by the year 2030. The Vrishabhavati would a good place to begin. 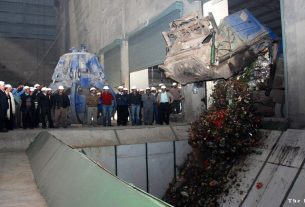